It was an unapologetic night of pure punk magic at the Hollywood Palladium this past Thursday evening. The one and only Sleater-Kinney graced us with their musical witchcraft. Amidst the sea of Bikini Kill, Ramones, and [in support of] “Janet Fucking Weiss” shirts, you could barely see the stage.

The crowd at the Palladium roared as Sleater-Kinney took the smoke-filled stage. Without time to kill, they began with the title track off their latest and record, “The Center Won’t Hold.” It’s been nearly 5 years since their last album! Carrie Brownstein addressed the crowd immediately with the direct lyrics, while Corin Tucker held a single drumstick in her right hand and played the beat. The buildup of the song itself is insane and once it was show time, the strobe lights flickered and the mayhem ensued!

Sleater-Kinney were there to rock and they sure did. The crowd went wild as they then performed the single, “Hurry On Home.” While they did play almost the entirety of the new record, Sleater-Kinney did cover plenty of hits from their extensive discography.

It’s no mystery to fans of Sleater-Kinney of the trying time Brownstein and Tucker had when former drummer, Janet Weiss quit shortly prior to the release of the new record. Weiss was and still is the backbone of Sleater-Kinney and it’s a damn shame she is no longer with the band. Easily one of the best drummers of our time, Weiss’ departure was felt.

Faced with the task of replacing the band’s heartbeat, Sleater-Kinney scrambled, but ultimately filled the spot with Angie Boylan of Freezing Cold and Aye Nako. They were now also accompanied by former touring member Katie Harkin and also keyboardist, Toko Yasuda who plays for St. Vincent (who also produced S.K’s new record and is the band’s “new direction …”)

The new Sleater-Kinney arrangement was for sure a change, but ultimately this band of 25 years still stood strong and put on one hell of a show. The new sound and show is rockin’ but Grimy Goods and MANY longtime fans still prefer the O.G. line that Weiss was certainly an integral part of. 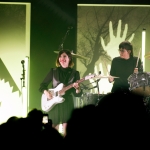 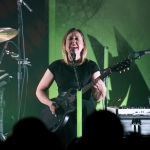 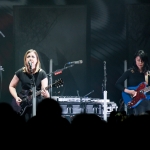 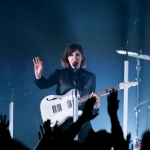 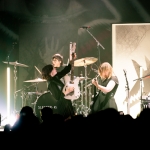 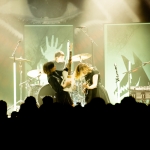 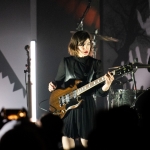 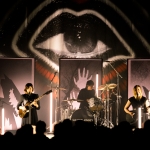 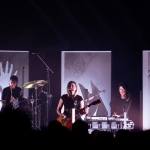 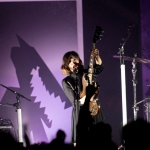